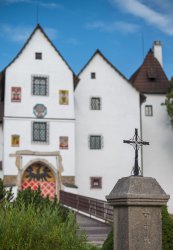 The Seeberg Castle, located approximately 5 km west of Franzensbad, is one of the few preserved ministerial castles in the Czech Republic and the only one exclusively used for museum purposes. The visitors are offered large exhibitions presenting the history of the castle, the development of 19th-century interiors and furnishings (Empire style, Biedermeier, Second Rococo, Neo-Renaissance, Gothic Revival style, Chippendale), famous Eger inlaid furniture and the history of porcelain production in Western Bohemia. The spaces of half-timbered baroque barn, shed and tower granary in the barbican are devoted to the folk culture, agriculture and crafts of Eger country in the 19th century. In the summer, the Seeberg Castle regularly livens up by the traditional Historical Fair or the Wine Festival held for the first time in 2015. Every year there are also concerts of various genres and thematic afternoon for children and adults.

The history of Seeberg Castle dates back to the times of the Staufen dynasty. The supposed origin of the castle in the 3rd quarter of the 12th century is related to the then territorial development of the Holy Roman Empire, and at the same time it documents the historic specifics of the historical region Egerland, which at that time, as an independent empire territory, gradually transformed into a sample model of the Staufen family domain. The ministeriales, who were originally not free but servants depended on the ruler, played a key role in this, and they became the exclusive keepers of the then Egerland, where they built a network of their own fortified settlements since the 12th century. The purpose of this military-administrative system in the vicinity of the Eger Imperial Palace was also the cultivation of the sparsely populated countryside, which made ministerial castles at the same time centres of intensive colonization. However, since the 13th century, the Eger ministeriality has lost the dominant position in parallel with the decline of Staufen power and subsequent interregnum, and the town Eger has become the hegemon of the disintegrating historical Egerland, it was governed by the numerous and powerful patriciate also emerging from the Ministerial ranks. The monopoly over this area was confirmed to the town by the pledge of the Egerland to the Bohemian king and because of that a considerable part of the ministeriales bound to the empire and the emperor gradually disappeared from the area. The Charter of Louis IV., the Bavarian, dated October 4, 1322, due to which the imperial fief of Egerland was pledged to John of Bohemia for 20,000 mark of silver, is at the same time the first written reference of the castle  [*1]. 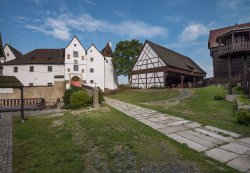 At the same time, the Seeberg Castle probably belonged to the town of Eger, to which Charles IV granted the right to administer the castle through an own clerk in 1349. In 1434 the Emperor Sigismund of Luxembourg donated the Seeberg Castle to his loyal servant, the Reich Chancellor, Burgrave of Eger and Ellbogen (Loket), Caspar Schlick. He handed the castle over to his brothers two years later, and in the 1960s the castle was bought by other owners, this time by the significant patrician family from Eger, the Juncker family, who built the church of St. Wolfgang in Seeberg. Subsequently, the castle was held for a long time by members of the original ministerial families von Neiperg (actually “from Neuberg” - today Podhradí u Aše) and von Brand, who lost the castle during the Thirty years' war. During the war, the commander of the Eger garrison, Veit Dietrich von Steinheim, settled in Seeberg. Thanks to him, the entire castle was restored after it was captured, plundered and burnt down by the Swedes on April 7, 1648. 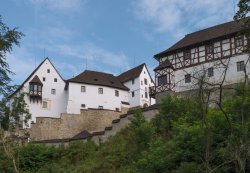 In 1703, the castle, including the adjoining dominion, returned to the property of town Eger and under its administration it was transformed into Meierhof. Further, in the castle palace there is subsequently founded a lodging house for poor weavers and laborers. It was only at the beginning of the 20th century that the group of local historic and ethnical researchers around “Unser Egerland” gave an impulse to the rescue of a dilapidated historical monument, after which the castle has been step by step renovated since 1907 under the leadership of City Building Councillor, Josef Pascher. Already in May 1915, a history-style restaurant was opened in the castle, which soon became a popular destination for spa guests and tourists from the broad surroundings [*2].

The castle served the same purpose until the mid-1950s. Later, however, it became dilapidated again and it was only in the mid-1980s that its dismal state made a group of enthusiasts save the castle from demolition. Thanks to the Director of the Town Museum Franzensbad, PhDr. Pavel Stříbrný, who took the castle reconstruction as his own, the intention was implemented through public finances, and the castle complex, complemented by a historical granary and a shed, was again made available to the public in 1990.

Stanice pro záchranu živočichů
telefon: + 420 731 824 390
e-mail: This email address is being protected from spambots. You need JavaScript enabled to view it.